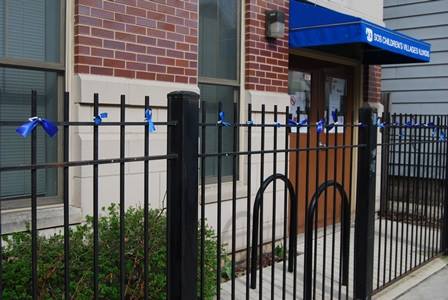 April was first declared Child Abuse Prevention Month by presidential proclamation in 1983. Since then, April has been a time to acknowledge the importance of families and communities working together to prevent child abuse. In Child Maltreatment 2013 (U.S. Department of Health and Human Services, Administration on Children, Youth and Families, Children’s Bureau) it was reported that in 2013 in the fifty states, the District of Columbia, and Puerto Rico, an estimated 679,000 children were victims of child abuse; and 1,484 children died as a result of abuse or neglect.

The majority of child abuse cases are preventable when community programs and systems are engaged and supportive. SOS Children’s Villages Illinois creates a community that cares about early childhood development, parental support, as well as strengthening families and transforming children’s lives. Each SOS Illinois site showed support by adding blue ribbons in front of our buildings.