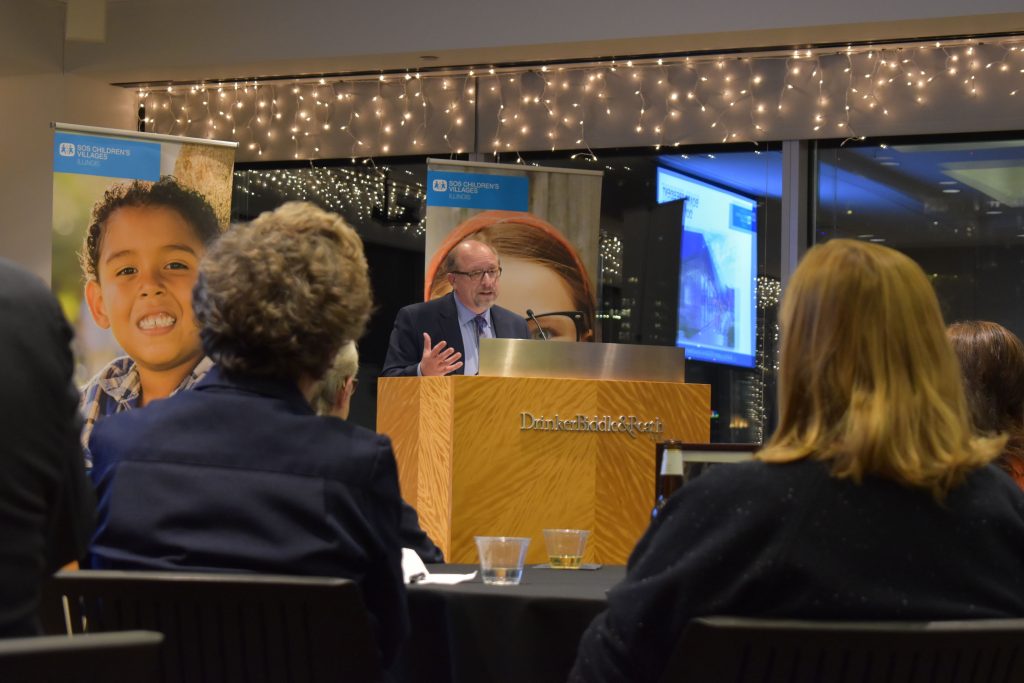 After four years of service at SOS Children’s Villages Illinois closing a bond deal, opening a Village, launching a capital campaign, closing in on building a new community center, all while continuing to ensure that every child in our care receives love in a safe and stable home environment, we wanted to take the opportunity to honor Board President Don Biernacki, who began leading the SOS Children’s Villages Illinois Board of Directors in January of 2014 and will be wrapping up his leadership role as President. Don will continue to help the organization as an integral member of our Board of Directors.

“When you talk about legacy and building this organization, all individuals, we accomplish what we accomplish because collectively they came together. They came together with shared values and a sense of purpose and meaning and a commitment and passion for that mission, for the mission of SOS Illinois.” Don Biernacki in his keynote address at our Annual Meeting.

Don is Senior Vice President of Construction at Related Midwest, and during his more than 28 years there, he has led the successful completion of more than 60 market-rate and affordable projects including, OneEleven, a 60-story luxury apartment tower at 111 West Wacker Drive in Chicago, for which he was recognized by the Engineering News Record as a Top 25 Newsmaker. Don also oversaw the renovation of Related Midwest’s affordable housing properties including Parkway Gardens in Chicago’s Woodlawn, the historic Julia C. Lathrop Homes—a new residential and mixed-use property in the Lincoln Square and North Center neighborhood of Chicago and the award-winning rehabilitation of the Marshall Field Garden Apartments in Chicago’s Old Town, in which he contracted a record number of community and minority businesses.

Don Biernacki is deliberate about bringing together individuals from a variety of backgrounds and disciplines in a cohesive and collaborative community-driven approach to development. Don was named as the 2017 recipient of the Award of Honor by the CBC, an award given to individuals who have distinguished themselves in both the community, and the construction industry as a whole. He has also been recognized by Reverend Jesse Jackson’s Rainbow PUSH Coalition as a Distinguished Labor Leader and featured in Crain’s Chicago Business for his steadfast community leadership and commitment providing community-based businesses valuable training and career opportunities.

In addition to being the President of the Board of Directors for SOS Children’s Villages Illinois, Don is committed to a number of community and charitable organizations. Among these organizations, Don serves in several roles including Treasurer on the Board of Directors for Saturday Place and also serves as board member of the Construction Engineering Advisory Council at Marquette University.

Though Don will be moving on from his role as Board President at SOS Children’s Villages Illinois, he will continue to serve on our Board of Directors. We honored Don at our 2018 Annual Meeting on Wednesday, December 5. As a member of the Board previously, he began his leadership role during the opening of the Roosevelt Square Village.

SOS Illinois awarded Don at our Annual Meeting with the 2018 Excellence in Leadership Award, an award given to outgoing Presidents of the Board. During his keynote address, Don referenced a quote by Daniel Burnham: “Make no little plans; they have no magic to stir men’s blood and probably themselves will not be realized. Make big plans; aim high in hope and work, remembering that a noble, logical diagram once recorded will never die, but long after we are gone will be a living thing, asserting itself with ever-growing insistency. Remember that our sons and our grandsons are going to do things that would stagger us.”

“When you think about the last quarter century – Lockport Village, Chicago Village, Casa Tepeyac, Roosevelt Square (Village), and now our plans for the new Community Center at Roosevelt Square, that doesn’t happen without making big plans. That doesn’t happen by thinking about small things, about things for the moment. When you recognize the legacy of Lockport, the call to do something different, to do something that is going to have an impact, to bring a model of foster care that, quite frankly, didn’t exist here, to keep siblings together. To support them. To love them. To do that with Foster Parents whose full-time job is to care for those children…

When we started this, it was unprecedented. It was uncharted territory. And then to take that to the Chicago Village. The first urban Village in the United States. To do it in a way that didn’t isolate the children, but actually made them a part of the community. The community that they needed to grow up in – the one that they would ultimately live in as adults. But we had to think big to do that. And then to follow with the Community Center. The very core and center of what our Village is about. And not just for the kids at SOS Illinois but for the community at large. Thinking big.”

Don’s time as Board President at SOS Illinois has been one of value, commitment, and service, and we are extremely honored to have worked with him in this capacity over the last four years. His dedication and love for our mission and our children is widely apparent.

From everyone at SOS Children’s Villages Illinois and all the lives you’ve touched over the past four years, we thank you, Don.

“You are your best thing.” —Toni Morrison #BlackHistoryMonth

SOS Illinois prioritizes the stability that keeping siblings together creates. We celebrate when we hear other stories of sibling groups staying together.
https://t.co/rclnKMZstp