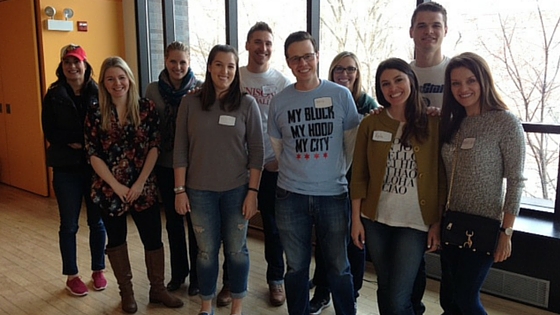 ELB member Drew Homyk arranged for the Bryan & Amanda Bickell Foundation, an organization that draws awareness to the misunderstanding of the “pit bull” breed, to visit with two of their trained dogs. The Foundation’s Executive Director and one of the co-founders, Alicia Boemi, began the event by speaking about the dogs. Following her talk, the children, in groups of two, were given time to meet and spend time with them. Some of the children were delighted from the very first introduction to these two guests. Other children, who were frightened initially, warmed up and showered affection and treats on the dogs by the end of the visit. 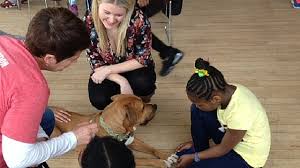 Watching these interactions was very heartwarming and indicative of the mission of the Bryan & Amanda Bickell Foundation. Founded in 2012 by Bryan Bickell, three-time Stanley Cup champion as part of the Chicago Blackhawks, his wife Amanda, and Boemi, the organization aims to dispel the notion that this dog breed is inherently violent and dangerous. An often misunderstood breed of dogs, the organization draws parallels to the similar kind of misunderstanding or mistreatment of children in need. Their mission is twofold: creating awareness about “pit bulls” as well as helping those who might not be able to help themselves. They are “dedicated to creating awareness for the compassionate, loyal, and misunderstood dogs labeled ‘pit bulls’, and working with them to assist abused children.” 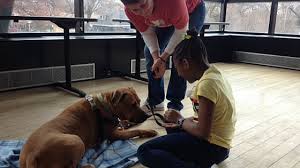 The pictures from the event speak volumes about the positive and informative experience this was for the children. Thank you to everyone at the Bryan & Amanda Bickell Foundation for making this event possible, advocating for those in need, and broadening our understanding of these amazing animals.

Giving to nonprofits in a time of crisis ensures the sustainability of essential programs and services. We cannot do it without you. https://t.co/ZQir0Yzagl

#Tutors play a critical role in providing targeted one-on-one tutoring, giving #children the instruction, support, and attention they need to improve academically. If you are interested in becoming a Virtual Tutor with us visit our website to learn how! https://t.co/ECmtcwRd3R

The Village model at SOS Illinois sets our style of foster care apart by creating a supportive and well-connected network for children, Foster Parents, and staff.
https://t.co/oeQqur6TD9

Whoa, this is huge for foster care in Kansas. Where else might reform happen like this? https://t.co/EREkOhZj8u